This page contains some example photos that will help you identify fake YM2612 chips, primarily based on their package style. It also touches on counterfeit IC detection in general.

If the YM2612s you received have the following characteristics, they are counterfeit, they will not work, and you should demand a refund from the seller. 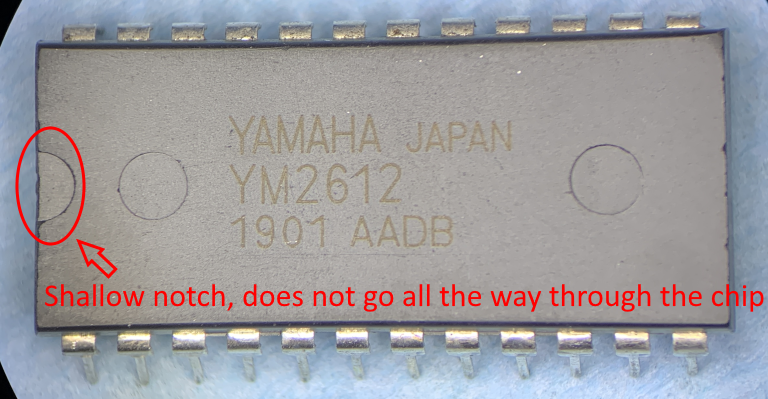 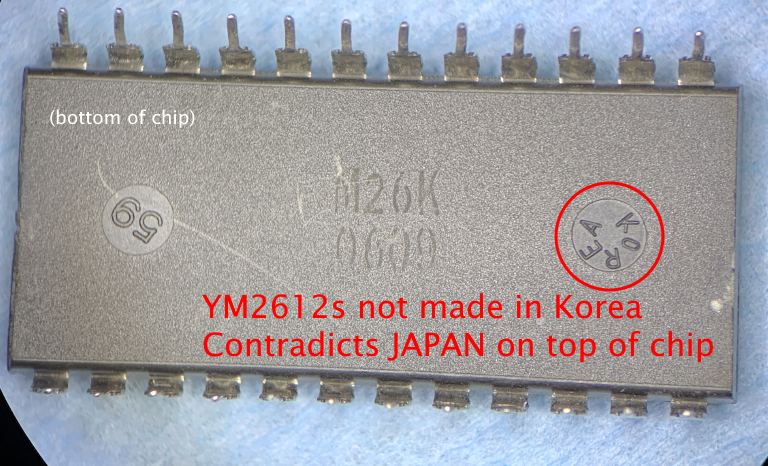 These sellers are known to be selling fake chips. Avoid them.

Yamaha outsourced manufacturing of the YM2612 to several fabs. There are four known package styles that were used for these chips. If you receive a chip with a package style not shown here, it is almost certainly fake. 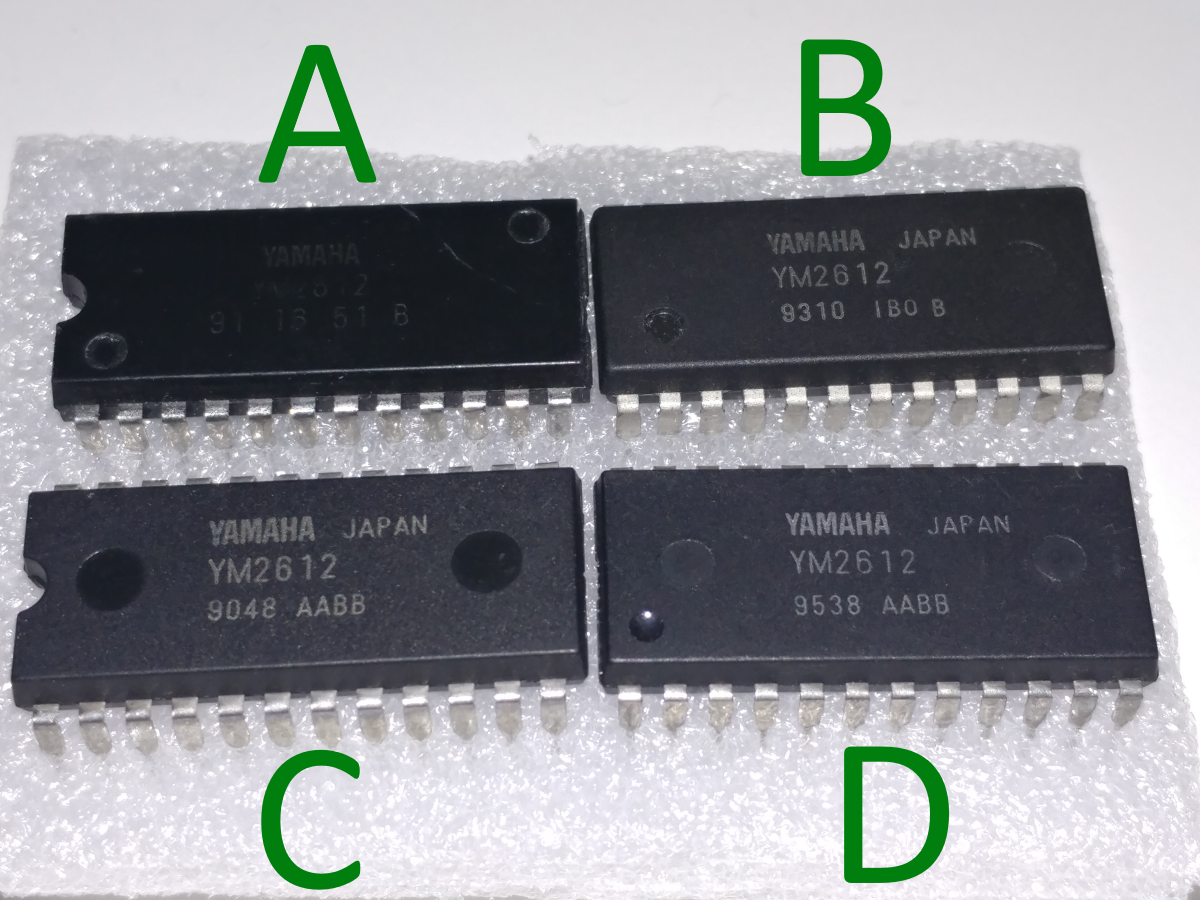 Details of the package styles

Text on the chip

Yamaha also used different styles of text on the chip. You may see either type on any package. 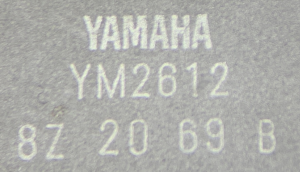 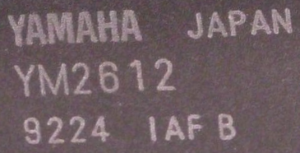 The left-aligned type is more common.

For various reasons, sellers of obsolete parts will remark chips. This is done by sanding the surface of the chip down slightly, applying a "blacktop" coating, and printing or laser etching new markings. Ostensibly, this is done to either "clean up" the chips by making them appear new by removing dirt and scratches, or to falsify the chip's markings - either to modify the date code to appear newer, or to make the chip appear to be a completely different part number. Some series of chips (typically memory) are graded or "binned" based on the speed at which they can perform reliably, and remarking is often used to make a cheaper, lower-performance part appear to be a much more expensive, faster one.

Evidence of illicit IC remarking is normally considered unequivocal proof that the chip is counterfeit and cannot be trusted, especially in industries where a failed part can mean life or death, such as military and aerospace. Unfortunately, it is becoming increasingly common for Chinese sellers of YM2612s to remark parts, even if they're good, and in the coming years it may become difficult to obtain non-remarked chips. For the purposes of this article, I only consider a chip counterfeit if it is not actually a YM2612, but has been made to look like one, as in the very first counterfeit image on this page.

Remarked ICs can usually have their surface scrubbed away using acetone and a cotton swab. This should not happen on a non-remarked chip. Remarked chips also have a unique "rubbery" feel to the surface if you rub your finger along it - hard to convey via text, but obvious if you have a few examples of good and fake chips. Keep in mind, however, that just because the chip was remarked, does not mean it's not a real YM2612!

Look at what you receive

In every single case of fake chips I have received personally, the photos on the seller's listing were of legit chips. Inspect the chips you receive, rather than the promo photos.

Let's take a look at a few examples. All chips in these images were obtained from various online sellers. 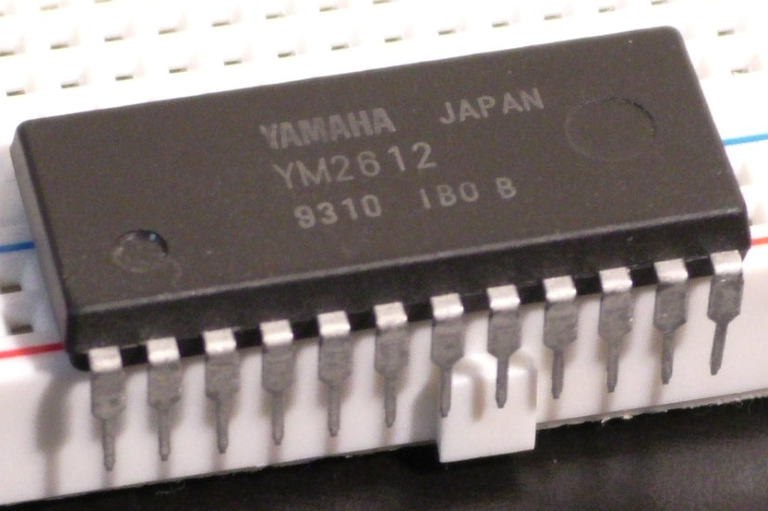 By looking at the ejector pin and pin 1 markings, this chip can be identified as package style B. The markings on the chip look good. It works when tested. Real. 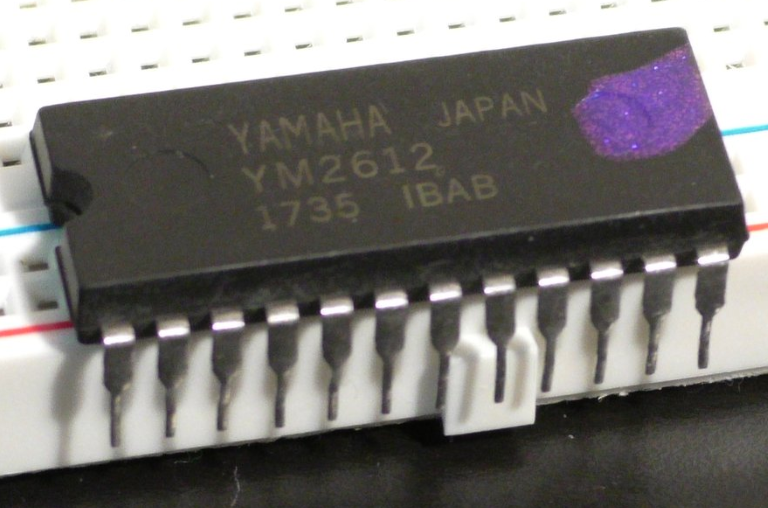 By looking at the notch and ejector pin markings, this chip can be identified as package style C. The chip has obviously been remarked, based on the incorrect Yamaha logo, the matte finish inside the ejector pin markings, and the nonsense date code (these chips weren't being made in 2017). The chip works when tested. Real, but remarked. (The purple nail polish is my own indicator that I've tested the chip.) 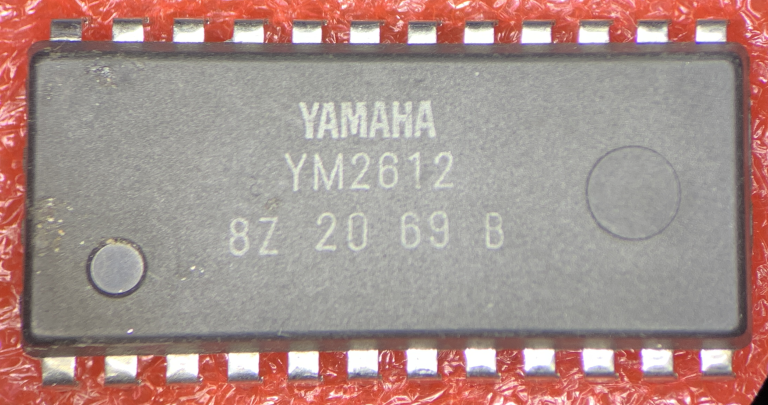 Pin 1 marking and single ejector pin marking are present on this chip, identifying it as package style B. Surface inside pin 1 mark is shiny. The logo and text look good. It uses the centered text style, which is uncommon, but still legitimate. Real.

The logo and text are completely wrong, and the date code is nonsense, which is evidence of remarking. The chip has two ejector pin markings and a notch, but does not match any known Yamaha YM2612 package styles. The key point to notice here is that the notch is shallow, and does not go all the way through the chip. It's not even worth testing these chips in-circuit. Fake. Aidan Lawrence has identified many of these fake chips as actually being 6116 SRAMs.

Testing fake chips in-circuit is not recommended. The incorrect package style is enough proof that the chip is fake. Some of the fakes have been confirmed to be 6116 SRAMs and the pinout of these chips could result in damage to the host device if inserted where a YM2612 should go.

Sellers of fakes may put up a fight when you ask for a refund. I would stick to something along the lines of "the chips are fake and do not work" in your communications. Keep it simple and stand your ground, and don't forget to file the dispute before your protection period ends. Don't be afraid to get PayPal or your credit card company involved if the seller won't give you your money back.

I'm happy to answer any questions you may have. If you have a question or comment, or would like my opinion on some chips you received, just send me an email at hello@kunoichilabs.dev